Download our document to see specific data of the service and how we work.

Let's Start A
Project Together

Contact us and get a dialogue going. If you need a quote or just want to discuss a project, we are here!

Function: noun / a handcart that holds groceries while shopping

Definition: A device whose concept was simple: make shopping easier for the customer and they’ll visit the store more frequently, and buy more.

The first shopping carts were put into service by grocery store owner Sylvan Goldman in 1937. Sylvan Goldman, born in 1898, grew up in the new Oklahoma Territory and went into wholesale produce with his brother. Oklahoma oil prices plunged in 1921. That wiped them out, so they went to California to study new methods for retailing groceries. They came back and set up a chain of self-service stores equipped with woven baskets customers could carry while they shopped.

It was a huge success. They finally sold out to the Safeway chain. This time, the Depression wiped out their Safeway stock. But “the wonderful thing about food is that everyone uses it—and uses it only once.” The Goldmans dove back in. By the mid-’30s they owned half of the Standard/Piggly-Wiggly chain. One night, in 1936, Goldman sat in his office wondering how customers might move more groceries. He stared idly at a wooden folding chair. Put a basket on the seat, wheels on the legs. . . Wait a minute. Why not two baskets, one above the other?

Goldman and a mechanic, Fred Young, began tinkering. Their first shopping cart was a metal frame that held two wire baskets. Since you have to be able to store shopping carts, the frames were designed to be folded and the baskets nested. Since they were inspired by the folding chair, Goldman called his carts “folding basket carriers.” Basically, they were folding metal frames with handles and wheels. Customers could place hand-held baskets on the carriers, and take them off again at checkout. Goldman formed the Folding Carrier Basket Company (still in business today as Unarco).

Goldman’s concept was simple: make shopping easier for the customer and they’ll visit the store more frequently, and buy more. Unfortunately, the customers didn’t want to use the carts. Young men thought they would appear weak; young women felt the carts were unfashionable; and older people didn’t want to appear helpless. So, Goldman hired models of all ages and both sexes to push the things around the store, pretending they were shopping. That, and an attractive store greeter encouraging use of the carts, did the trick.

By 1940 shopping carts had found so firm a place in American life as to grace the cover of the Saturday Evening Post. Supermarkets were redesigned to accommodate them. Checkout counter design and the layout of aisles changed.

In 1946, Orla E. Watson, of Kansas City, MO, devised a plan for a telescoping shopping cart which did not require assembly or dis-assembly of its parts before and after use; this cart could be fitted into another cart for compact storage, hence the cart descriptor. Watson applied for a patent on his shopping cart invention in 1946, but Goldman contested it and filed an application for a similar patent. In 1949 Goldman relinquished his rights to the patent and granted them to Watson. In exchange, Goldman received licensing rights in addition to the three other licenses previously granted; Watson continued to receive royalties for each cart produced.

The shopping cart has undergone many more changes as time has progressed. The shape has changed as ergonomic considerations have been taken into account. For the most part, carts are bigger to hold more merchandise, thus enabling more sales. Although basic design hasn’t changed much in the last 50 years, the next generation of carts is still evolving, with even bigger upper and lower baskets. Some stores are starting to get cart accessories that hold two kindergarten-size kids.

Recent studies determined while the cartless retailers such as Sears and J.C. Penney have suffered slow sales in recent years, the retailers that do use shopping carts, among them Target and Home Depot, have had booming sales. In large part this could be attributed to the ease of shopping made possible by Sylvan Goldman’s invention—the shopping cart.*

Sundial is fully committed to preserving the environment. One such example is our work in restoring and powder coating corroded steel supermarket shopping carts. If it weren’t for our restoration process, these shopping carts would end up in landfills.

Our powder coating process first begins with full dismantling of each steel shopping cart. We then sandblast them and, thus, rid them of corrosion and rust. After we’ve completed the sandblasting process, we powder coat them with an anti-microbial gray Hammer tone powder to prevent the spreading of germs. This technology has been around since the days of the Pharaohs but not used until recently in the powder coating industry. The silver in our powder acts as a natural sanitizer.

Once the powder coating process has been completed, we re-assemble each steel shopping cart, install child-restraint seat belts and new wheel casters.

By powder coating and restoring these steel shopping carts, Sundial has lessened the carbon footprint (shopping carts are re-purposed instead of being placed into a landfill) and saved the supermarket industry thousands in new shopping cart purchase costs. 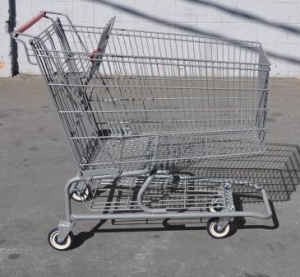